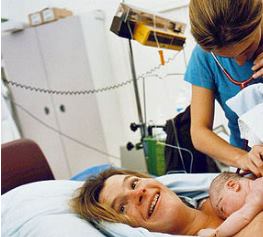 Breastfeeding can begin immediately after birth. The baby is placed on the mother and feeding starts as soon as the baby shows interest.

According to studies cited by UNICEF, babies naturally follow a process which leads to a first breastfeed. Initially after birth the baby cries with its first breaths. Shortly after, it relaxes and makes small movements of the arms, shoulders and head. The baby crawls towards the breast and begins to feed. After feeding, it is normal for a baby to remain latched to the breast while resting. This is sometimes mistaken for lack of appetite. Absent interruptions, all babies follow this process. Rushing or interrupting the process, such as removing the baby to weigh him/her, may complicate subsequent feeding. Activities such as weighing, measuring, bathing, needle-sticks, and eye prophylaxis wait until after the first feeding

Newborn babies typically express demand for feeding every 1 to 3 hours (8-12 times in 24 hours) for the first two to four weeks.  A newborn has a very small stomach capacity. At one-day old it is 5 to 7 ml, about the size of a marble; at day three it is 0.75-1 oz, about the size of a “shooter” marble; and at day seven it is 1.5-2 oz, or about the size of a ping-pong ball. The amount of breast milk that is produced is timed to meet the infant’s needs in that the first milk, colostrum, is concentrated but produced in only very small amounts, gradually increasing in volume to meet the expanding size of the infant’s stomach capacity.

According to La Leche League International, “Experienced breastfeeding mothers learn that the sucking patterns and needs of babies vary. While some infants’ sucking needs are met primarily during feedings, other babies may need additional sucking at the breast soon after a feeding even though they are not really hungry. Babies may also nurse when they are lonely, frightened or in pain….Comforting and meeting sucking needs at the breast is nature’s original design. Pacifiers (dummies, soothers) are a substitute for the mother when she cannot be available. Other reasons to pacify a baby primarily at the breast include superior oral-facial development, prolonged lactational amenorrhea, avoidance of nipple confusion, and stimulation of an adequate milk supply to ensure higher rates of breastfeeding success.”

During the newborn period, most breastfeeding sessions take from 20 to 45 minutes.  After one breast is empty, the mother may offer the other breast.

Please note, Every step and every decision you make as a result of using the application or site is at your own risk and responsibility.
This guide is also based on wikipedia’s texts & images. We thank the authors
Our Privacy Policy